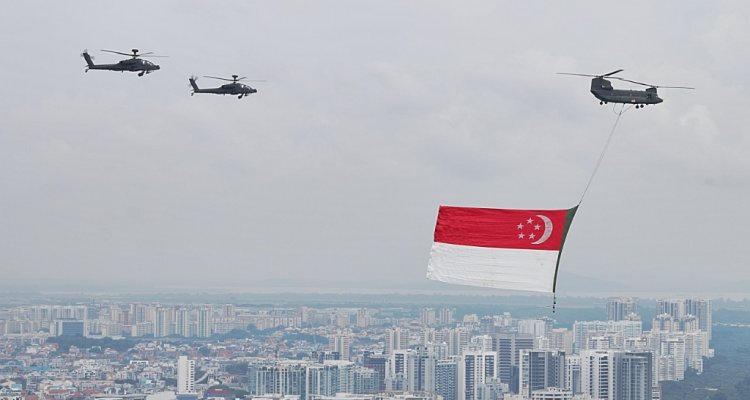 Every National Day, Singaporeans experienced an elevated moment of national pride when they witness the visual spectacle of their state flag being hoisted by the powerful Chinook CH-47 heavy-lift helicopter, flanked by Apaches AH-64 attack-helicopters as it flew by spectators at the floating platform and Marina Bay during the national anthem segment. But unknown to most, the background scene is made possible only through immense effort, detailed logistics and expertly tuned co-ordination by personnel of the air force to execute the event like clockwork. 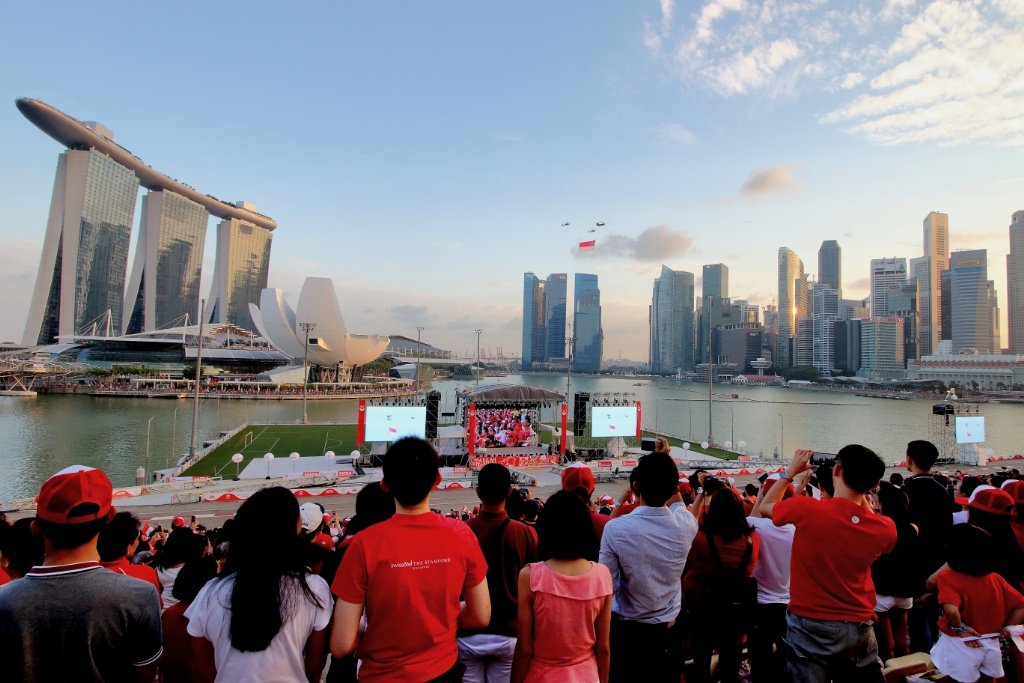 127 Squadron -Home of the Stallions 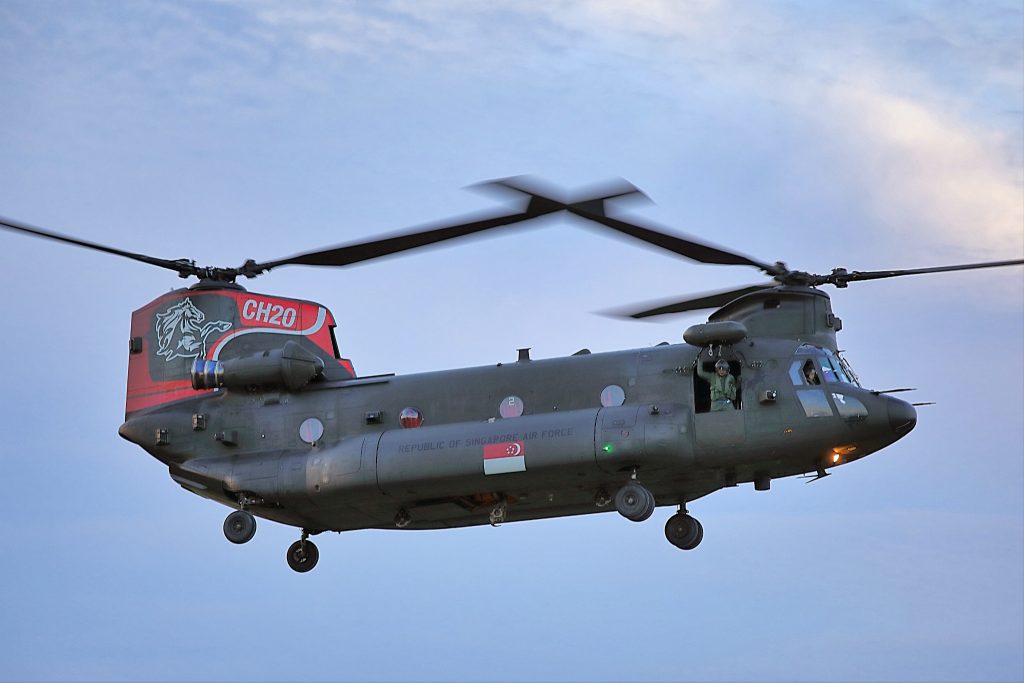 Formed at Sembawang Air Base in 1998, the 127 Squadron was established to provide the Republic of Singapore Air Force (RSAF) with vital heavy-lift /support role of troop and equipment transportation. When the need arises, the squadron’s Chinooks are also used to bolster 125 Sqn & 126 Sqn in Search & Rescue (SAR) operations. Some of us might recall seeing the Chinook on news update, helping to put out forest fires in the Sumatra forest fires.  During National Day Parade, the Chinooks of 127 Sqn takes on a different, but no less significant role by flying the Singapore flag proudly over the parade venue since year 2000.

The state flag flypast has certainly come a long  way since the first state flag flypast in 1970, when the flypast was carried out by an Alouette III helicopter. Originally measuring approximately 3m by 2m, the flag size was later increased to 28 metres by 19 metres and was flown by the Super Puma in 1989. The flag took 20 riggers and three weeks to machine-stitch, and earned its place in The Guinness Book of World Records for being the largest flag in the world to be underslung.

Interesting facts of the State Flag

I was honoured to be part of RSAF civilian support group to be invited to witness and learn more about the hoisting processes at Pulau Sudong on the 24 Jun 2017. Our Chinook flight pilots were LTC Liao Ming Hao and co-pilot Cpt Tan Jun Sheng, with Major Nair Vivek and ME4 Edward Lim (Fish) providing valuable ground info of the state flag operations. 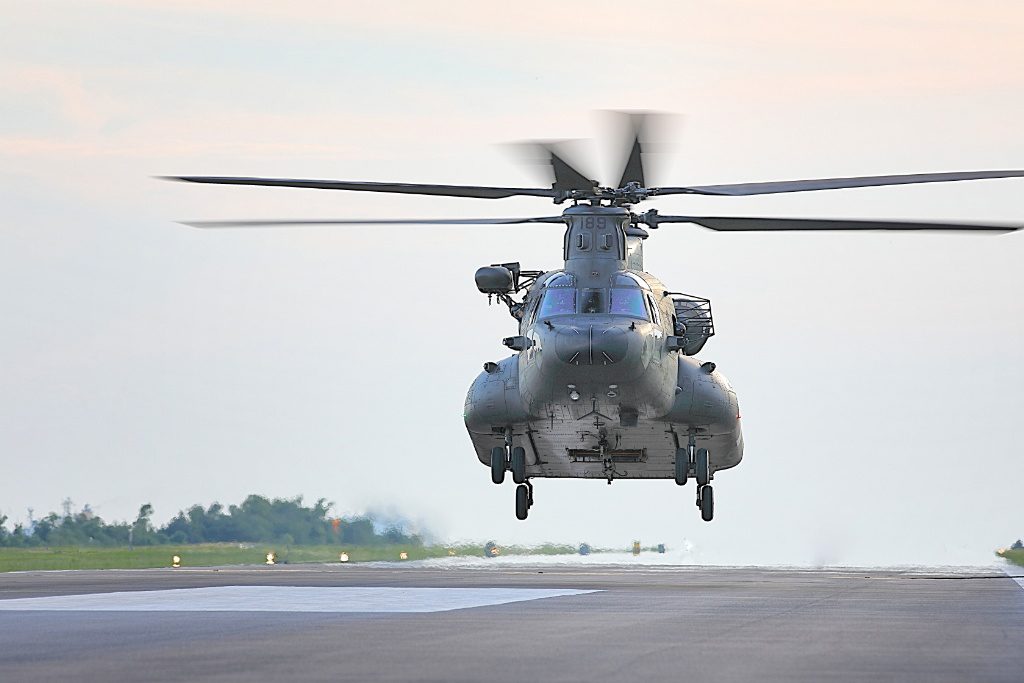 A Chinook arriving at Pulau Sudong, soon to be rigged up with the state flag and proceed with the combined NDP rehearsal at Marina Bay. 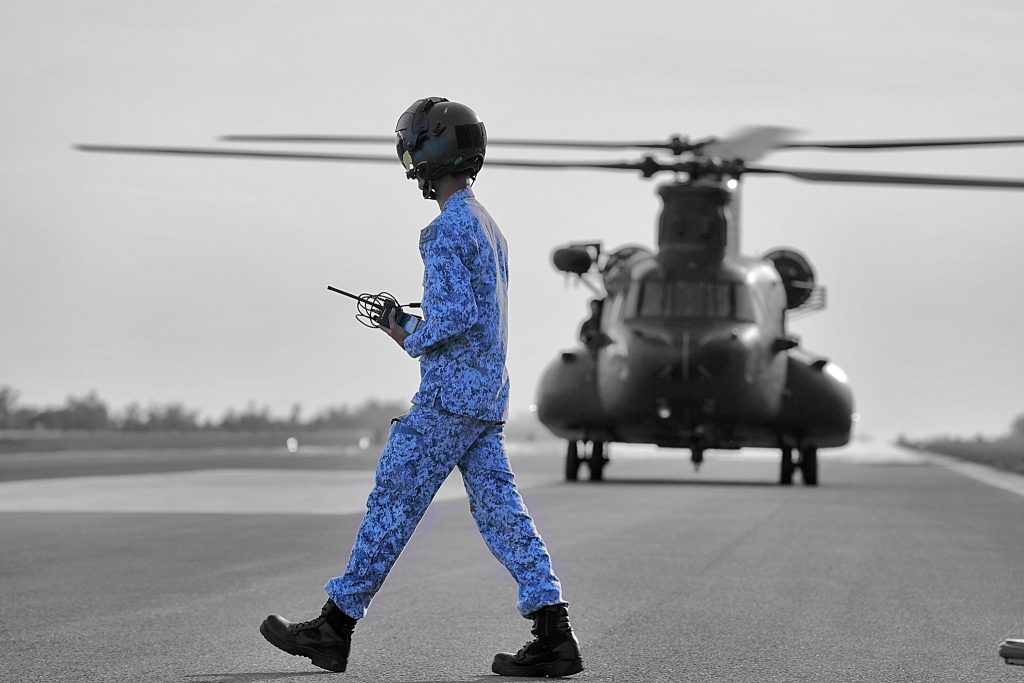 An Air Force Engineer (AFE) getting ready to meet the helicopter flight crew as it taxi to a rigging point. 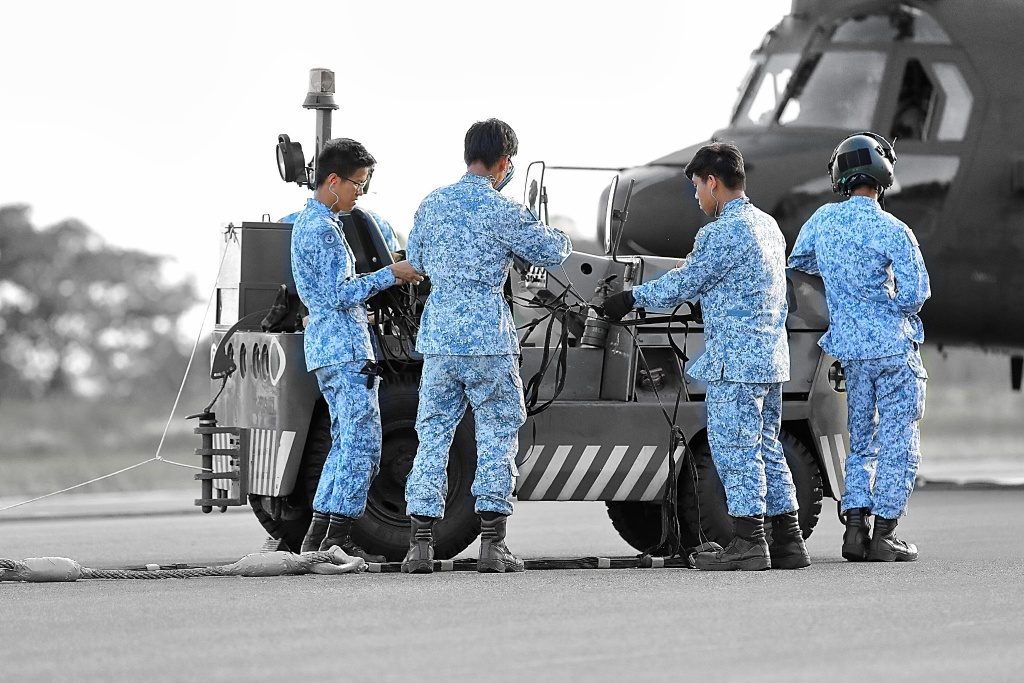 AFEs checking on the steel cables and joints before being hooked up with the Chinook. Everything are well prepared in advance and the hoisting process hummed along like a well-oiled F1 team. 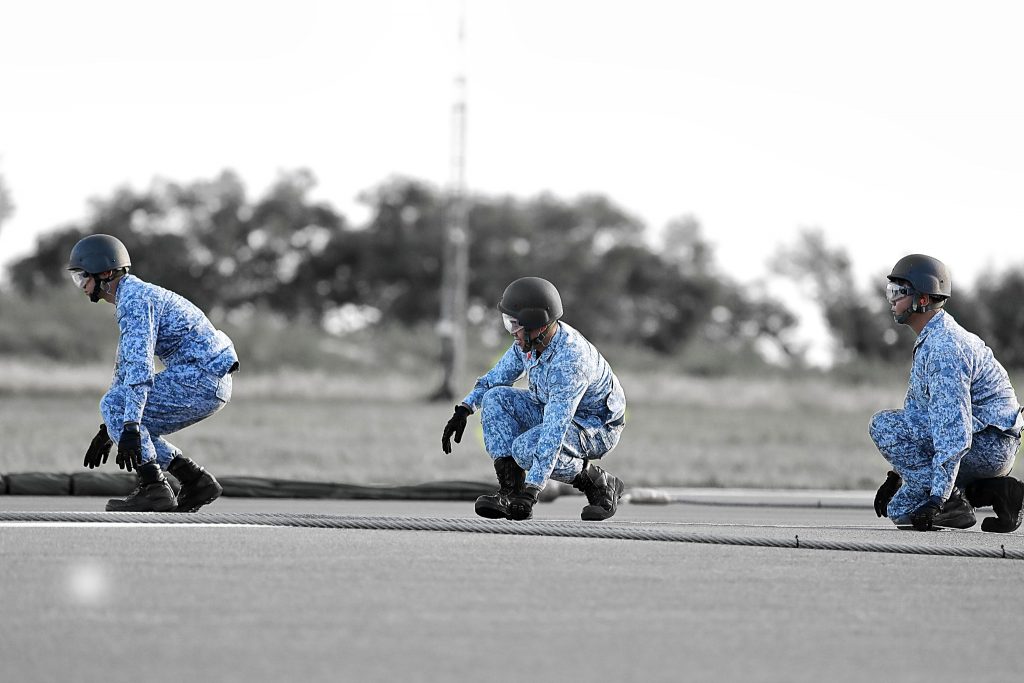 Personnel ensuring the cables and flag assembly in the right position. The jetwash from the Chinook is extremely powerful and will move things around. 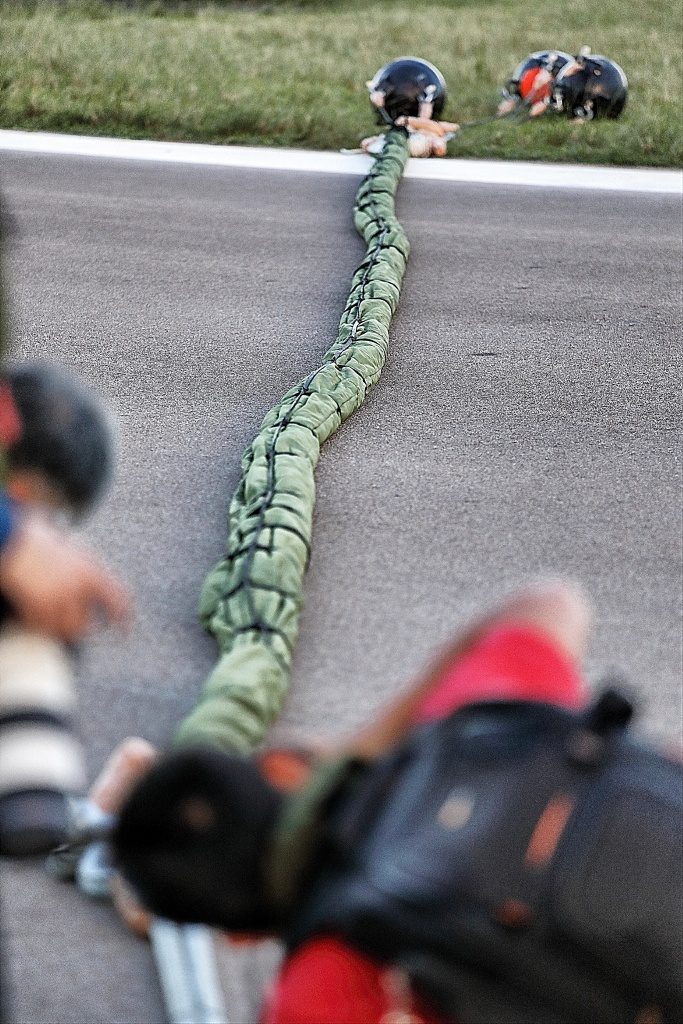 The state flag all packed and ready to be hoisted up. Our group of attendees can’t resist taking pictures of the precious “package”, which we never see again in this form unless we are at this rigging point in Pulau Sudong. This packed state flag itself weighs 100kg. 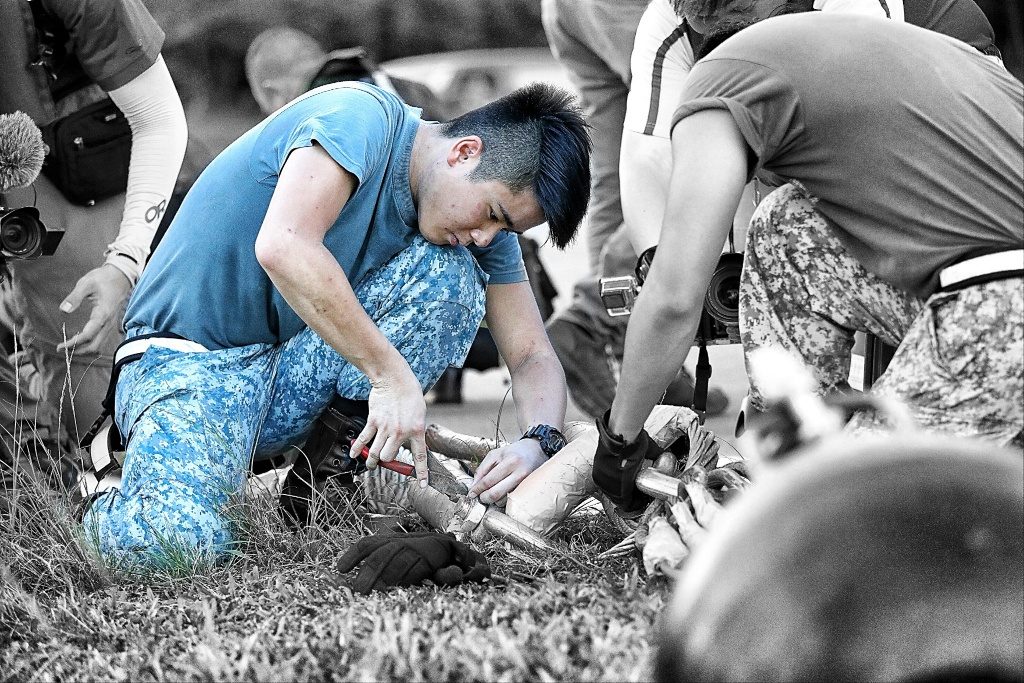 AFEs working on the assembly mechanism after each return flight. There are 3 mirror teams of Chinooks (together with Apache attack helicopters, too) with the state flag at every rehearsal and during the actual national day to ensure fail-safe operation, so that the State Flag flypast goes on, no matter what. 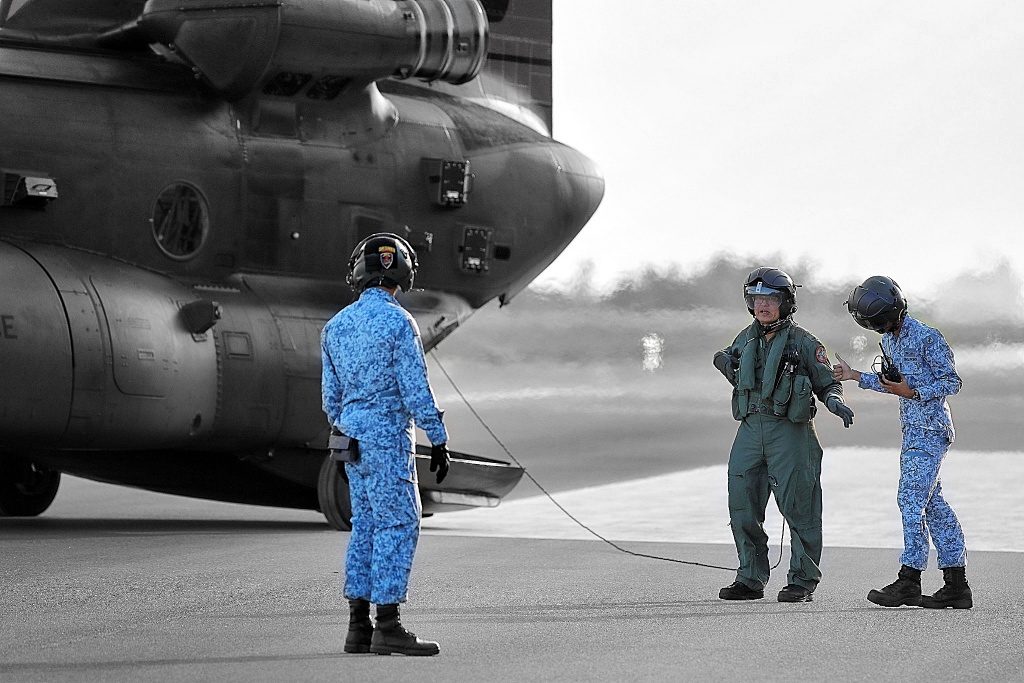 Flight air crew and AFEs conversing to ensure all matter are in good order before the Chinook lifts off. 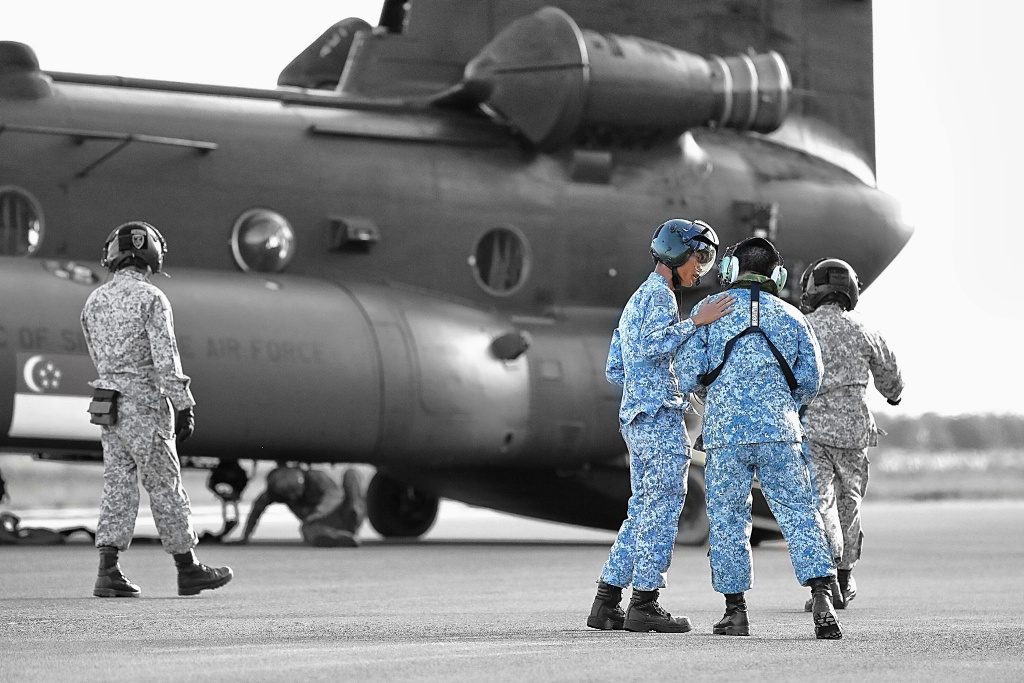 Teamwork, camaraderie and communication are what keep the processes smooth flowing and on a clockwork. 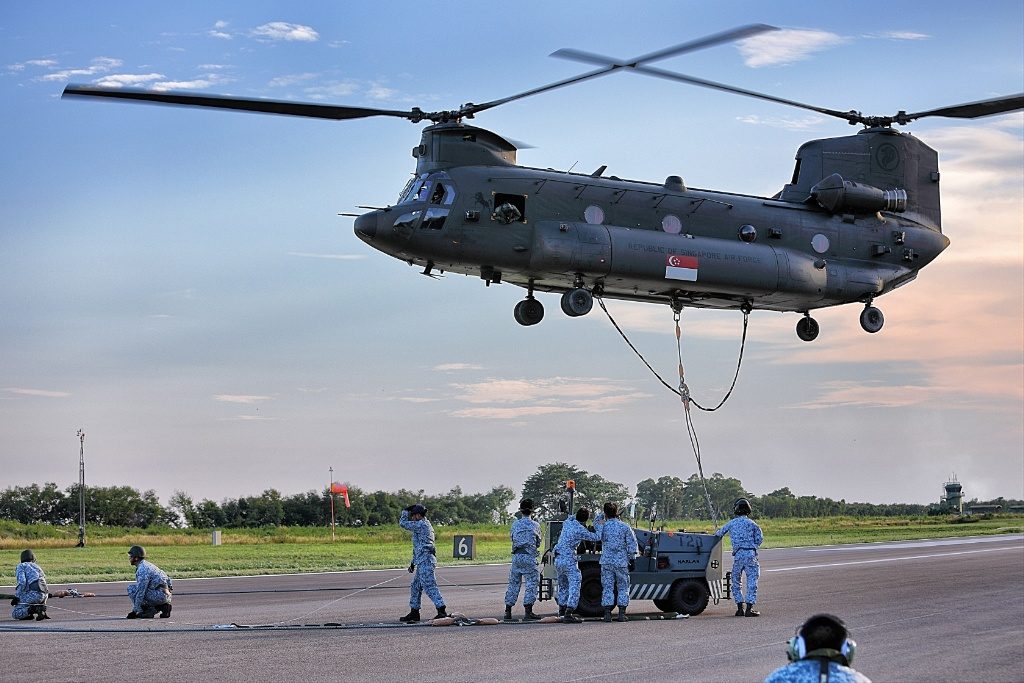 And we have lift-off. I like to call it the focal point of the event, everything we are doing, rested on the steel cables and links. Every part, plays a part. And this flag rigging methodology is FULLY conceptualized and designed in Singapore  The powerful Chinook was designed and produced in the early 1960s. It is one of the few aircraft of that era – along with the fixed-wing Lockheed C-130 Hercules cargo aircraft – that remain in production and frontline service, with over 1,200 built to date. The helicopter has been sold to 16 nations. You might seen it carrying heavy artillery guns and infantry vehicles during the armed force open house. 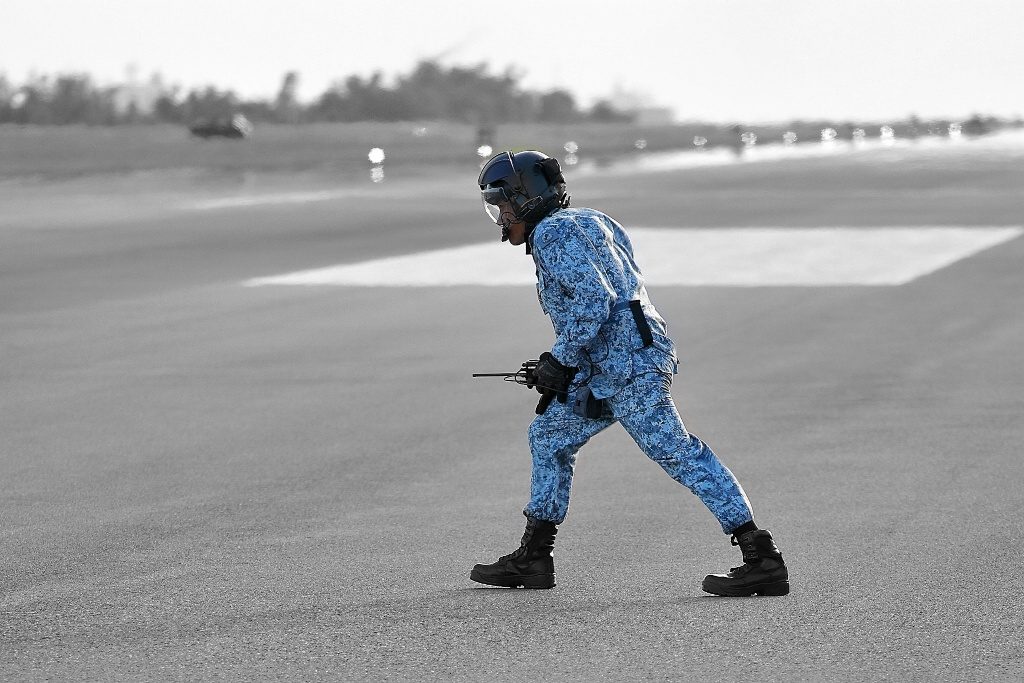 The jetwash from the Chinook rotor blades are extremely powerful.  Anyone standing below when the helicopter hovers risks being blown away. That’s why in the picture above, the AFE have to adopt the balancing stance. The helmet visor is to prevent injury to the eyes from flying debris kicked up by the jetwash. 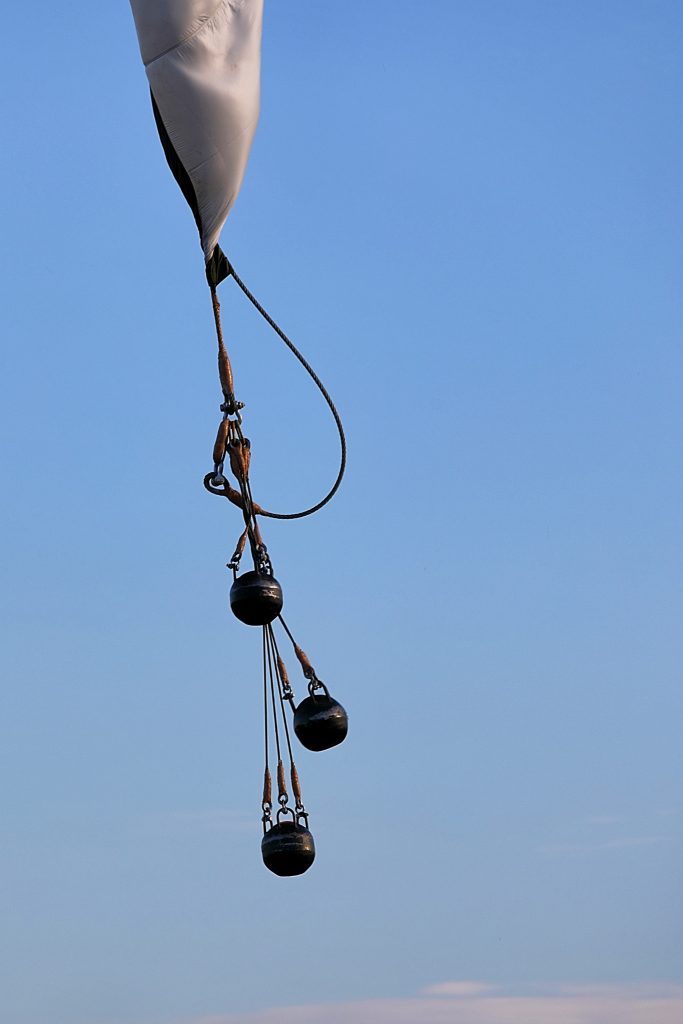 The ballasts ..at 500lb each..that’s 1500lb or 600kg, serve a vital function in keeping the line tension taut and stabilize the flag assembly during flight. 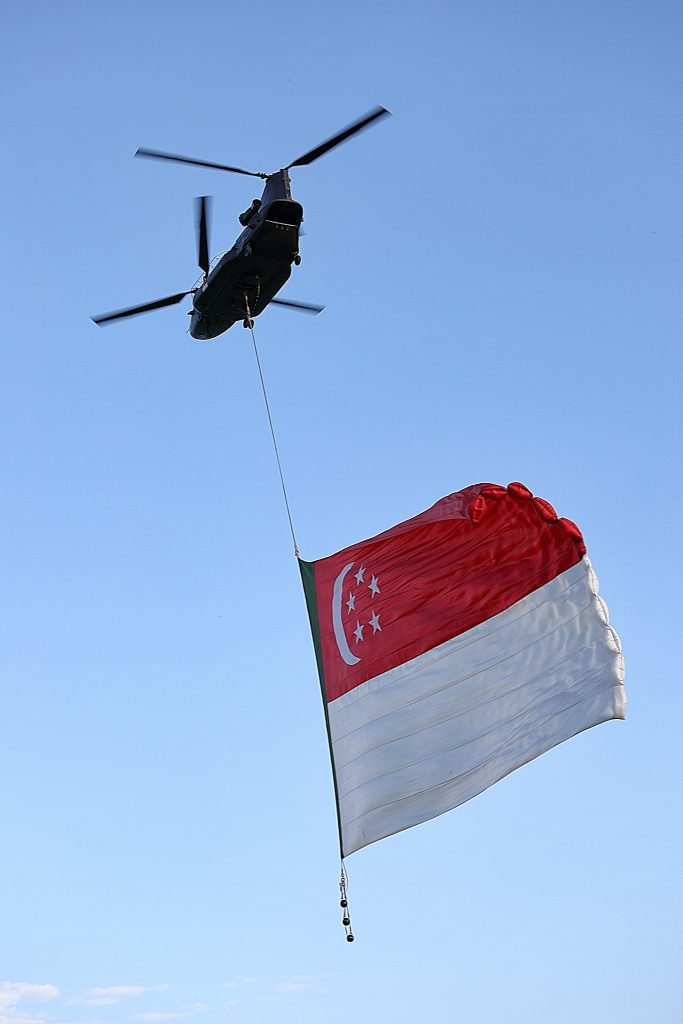 A successful deployment of the state flag.  A fantastic surreal feeling to see the flag unfolded nicely. We are talking about a flag that is 1.5 times that of a basketball court. The speed at which the flag is being flown requires a skilled and experienced hand – too fast, the flag will rip apart, too slow, it will start to crumple and fold. So if the arriving President reaches slightly late or shake one hand too many, the pace at which the state is being flown into the Bay area, just in time for the National Anthem, can be affected. You can imagine how stressed everyone is. 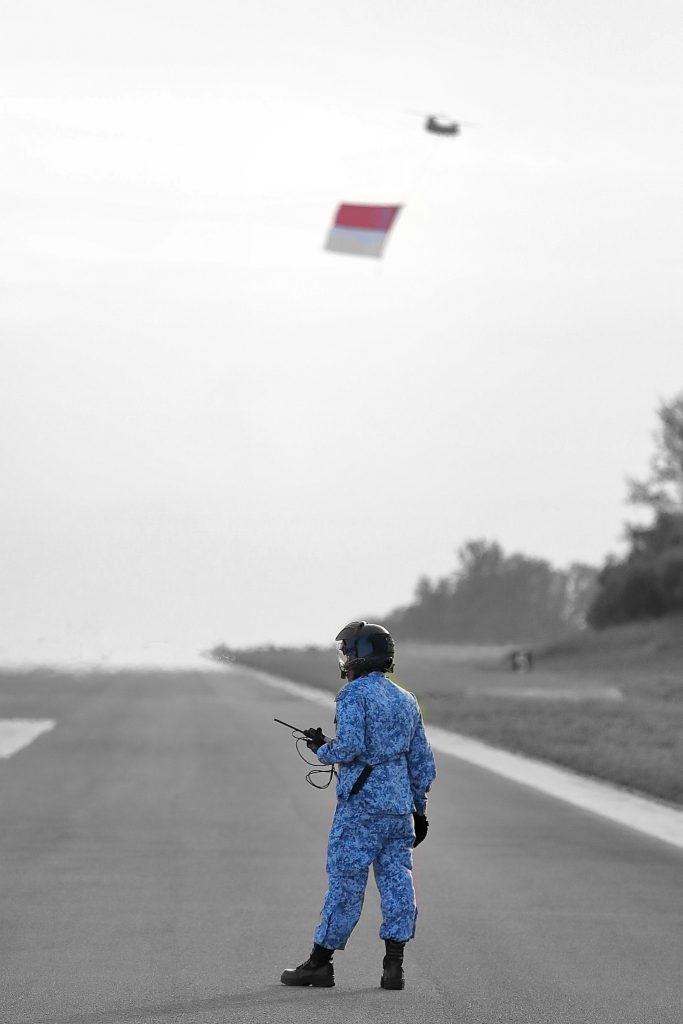 One away, two more to go and with three teams, the state flag flypast is a given , always. 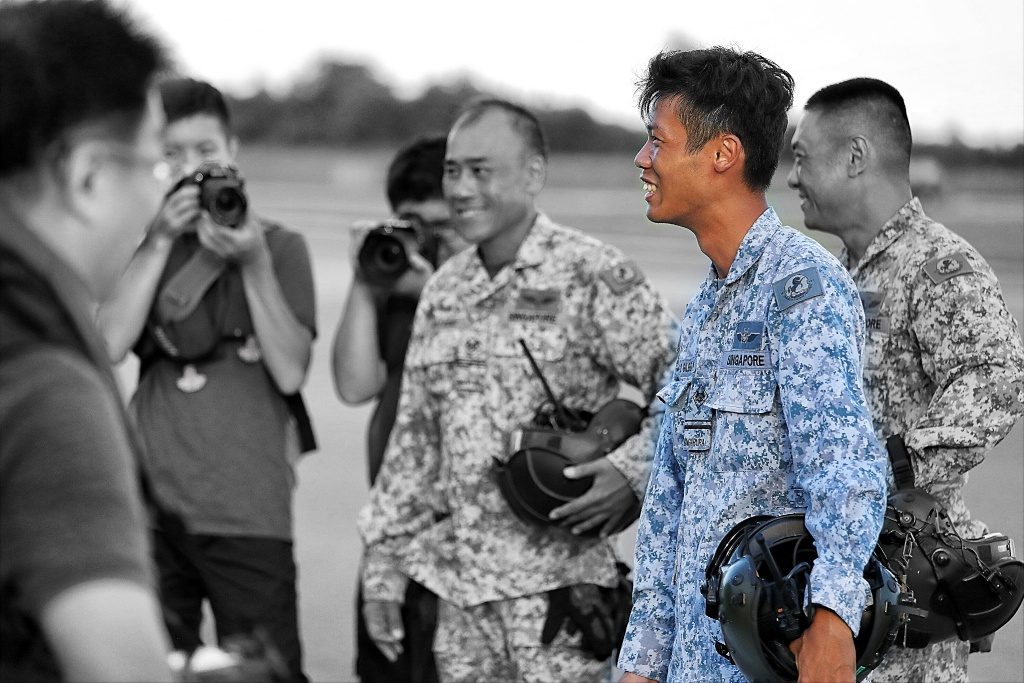 Free flow of sharing and military hospitality during the visit to Pulau Sudong. Awesome session indeed ! 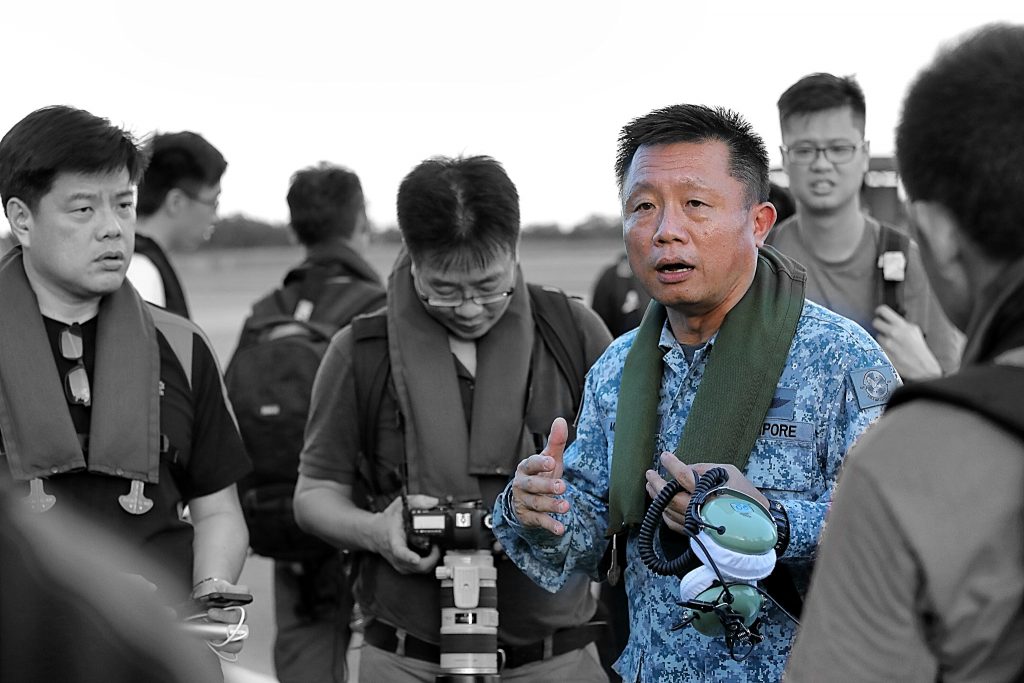 After witnessing the state flag deployment and listening to ME4 Edward Lim’s (callsign Fish) sharing, we realized we knew so little about an event that lasted less than a minute, up there in the air on the Floating Platform on National Day. 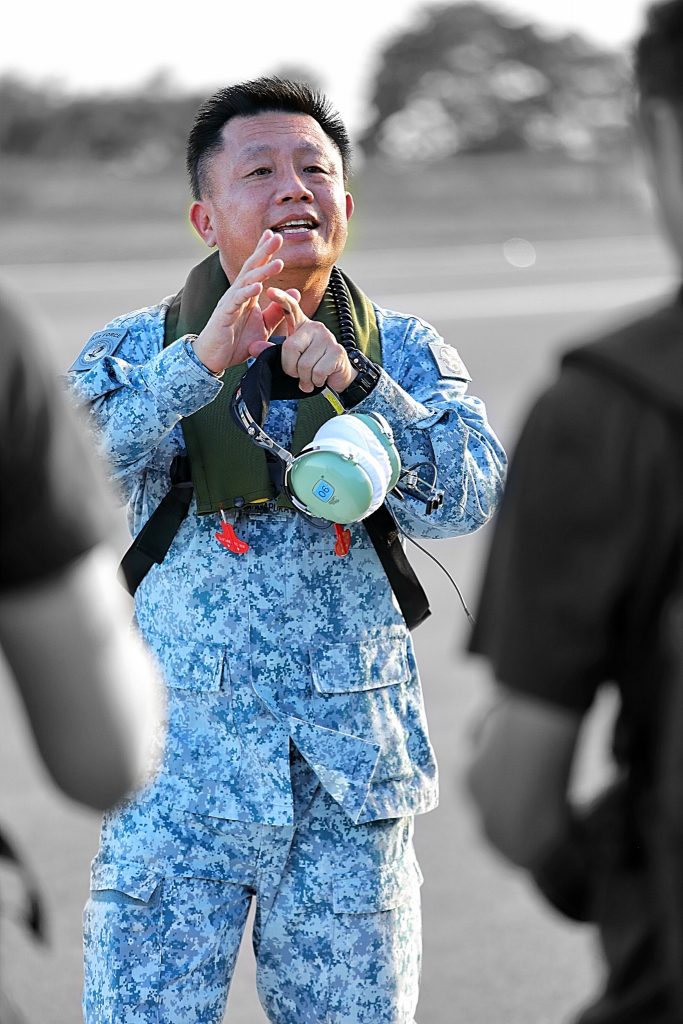 ME4 Encik Edward Lim sharing with us nuggets of gold about the state flag operation and history. If there’s one person who knows the state flag A-Z, it’s him ! 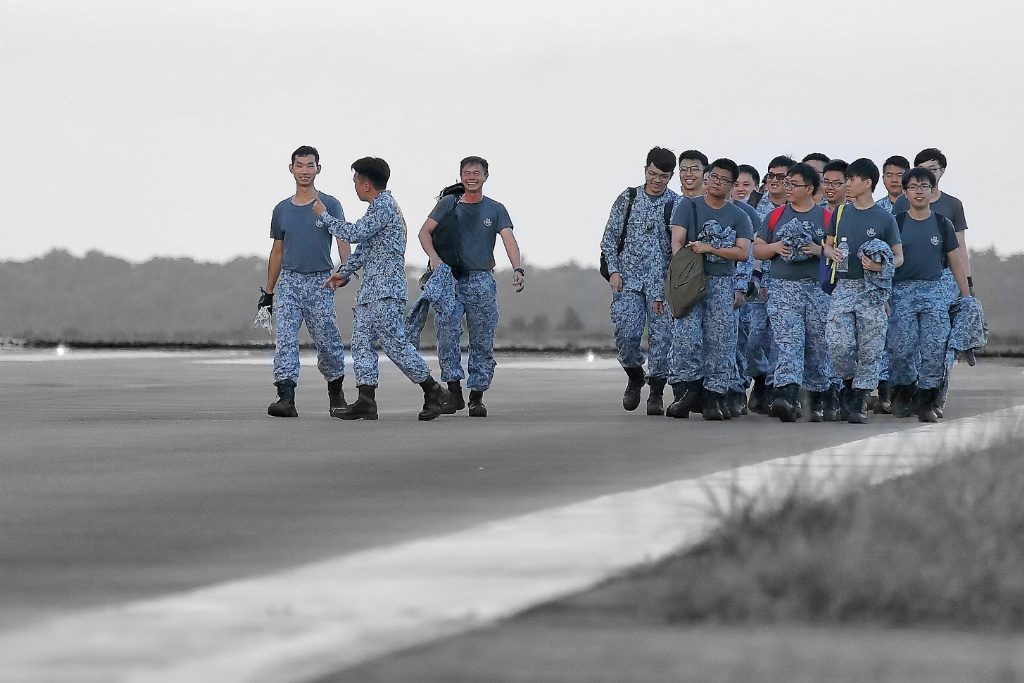 It takes a “village” for the entire flag rigging operations, 300 full time or reservist personnel to be exact. That’s 300 Stallions !

This blog is dedicated to the hardworking men and women of 127 Squadron, who toiled tirelessly to ensure this spectacular annual aerial feat, which most of us take for granted. Special mention to flight pilots- LTC Liao Ming Hao and co-pilot Cpt Tan Jun Sheng, for the really smooth flight and ME4 Edward Lim (Fish) for the hospitality and valued sharing.  And to AFIC – Major Christopher Eng, Malcolm Koh and Grace Chew for organizing the eye-opening event.

Author’s note : All pictures or video used in blog are copyrighted to RSAF and all rights reserved. No pictures should be copied, used or duplicated without written consent. 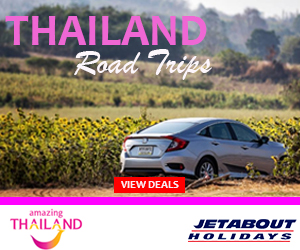